Shaban is the 8th month in the Islamic calendar and is considered one of the meritorious months for which we find particular instructions in the Sunnah of Prophet Muhammad . It is reported that Prophet Muhammad, used to fast most of the month in Shaban except the last few days of the month.

1. The blessed companion Usama ibn Zaid , reports that he asked Prophet Muhammad : “Messenger of Allah, I have seen you fasting in the month of Shaban so frequently that I have never seen you fasting in any other month.” Prophet Muhammad , replied: “That (Shaban) is a month between Rajab and Ramadan which is neglected by many people. And it is a month in which an account of the deeds (of human beings) is presented before the Lord of the universe, so, I wish that my deeds be presented at a time when I am in a state of fasting.”

2. Ummul Mu’mineen ‘Aishah (r), says, “Prophet Muhammad , used to fast for most of Shaban. I said to him, ‘Messenger of Allah, is Shaban your favorite month for fasting?’ He said, ‘In this month Allah prescribes the list of the persons dying this year. Therefore, I like that my death comes when I am in a state of fasting.’ ”

These reports indicate that fasting in the month of Shaban, though not obligatory but is very deserving and that Prophet Muhammad did not like to miss it.

The Night of nisf (mid) Shaban

This is the night occurring between 14th and 15th day of Shaban. Traditions of Prophet Muhammad , show that it is a meritorious night in which the people of the earth are attended by special Divine Mercy.

On the Night of 15th Shaban, after Maghrib or Isha prayer it is traditional practice to read Surah Yasin and make special supplications for good health, protection from calamities and increased Iman.

According to tradition this night has special blessings that are directed towards the faithful. Therefore, as much as possible, this night should be spent in worship and total submission to Allah Almighty. Also, fasting is recommended on the day immediately following this Night, i.e. the 15th day of Shaban. 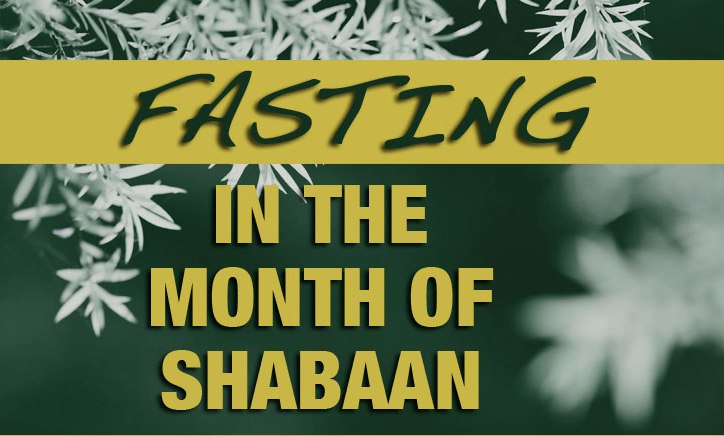