Importance of Lailatul Qadr (The Night of Decree)

The night of Laylatul Qadr (the Night of Power / Decree) in Ramadan is of great significance. Holy Quran was sent down in this night. Angels descend in this night. This night is better than a thousand months. Whatever good deeds you do in this night, it’s like you did it for 1000 months or 83 years! Authentic hadiths say Laylat-al-Qadr happens in the last 10 days of Ramadan (in an odd night). There is strong scholarly opinion that it is mostly on 25th, 27th or 29th night of the Ramadan. Don’t miss it!

Things you must be during Lailatul Qadr

Special Dua recommended by our Prophet

(O Allah, You are Most Forgiving, and You love forgiveness; so forgive me)

Repeat all these again and again like you may not get another Ramadan or Lailatul Qadr !

Lailatul Qadr in the Quran

Lailatul Qadr in the Hadiths

‘A’isha (Allah be pleased with her) and Ibn Numair reported Allah’s Messenger (ﷺ) as saying:

Look for Lailat-ul-Qadr in the last ten nights of Ramadan.

Salim reported on the authority of his father that a person saw Lailat-ul- Qadr on the 27th (of Ramadan). Thereupon Allah’s Apostle (ﷺ) said:

I see that your dreams agree regarding the last ten (nights of Ramadan). So seek it on an odd number (of these ten nights).

Ibn Umar (Allah be pleased with them) reported Allah’s Messenger (ﷺ) as saying:

Seek it (Lailat-ul-Qadr) in the last (ten nights). If one among you shows slackness and weakness (in the earlier part of Ramadan), it should not be allowed to prevail upon him in the last week.

‘Aishah (May Allah be pleased with her) reported:

I asked: “O Messenger of Allah! If I realize Lailat-ul-Qadr (Night of Decree), what should I supplicate in it?” He (ﷺ) replied, “You should supplicate: Allahumma innaka ‘afuwwun, tuhibbul-‘afwa, fa’fu ‘anni (O Allah, You are Most Forgiving, and You love forgiveness; so forgive me).” 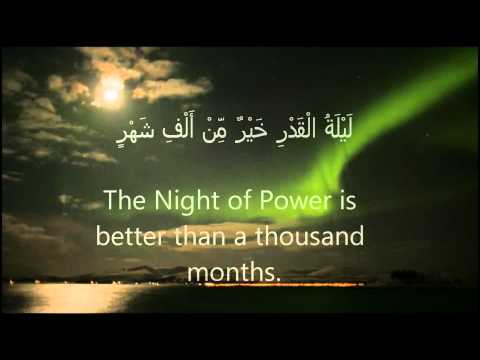